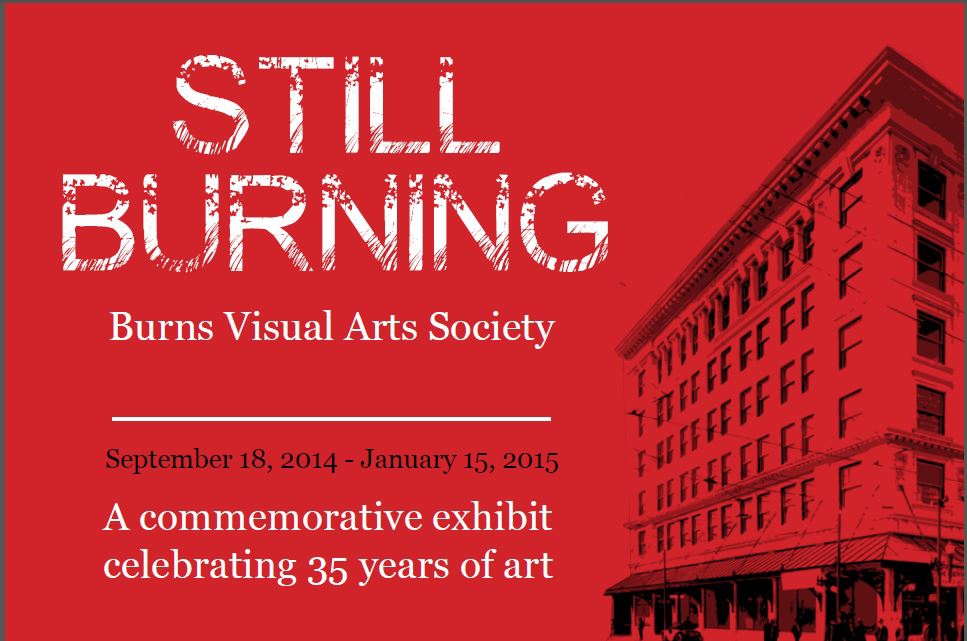 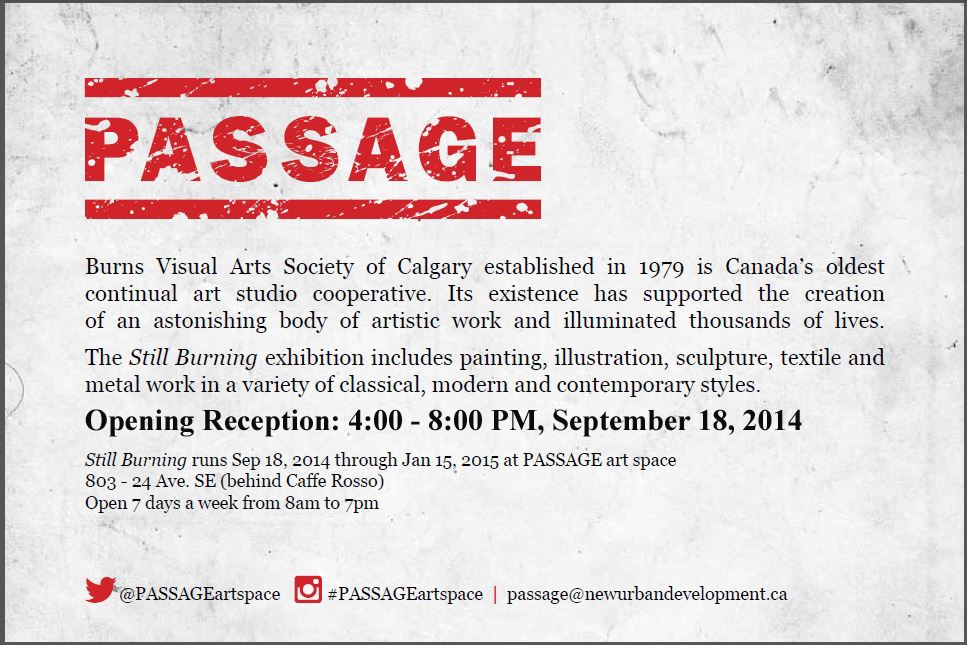 Join Us in Celebrating 35 Years of Creativity!

The Burns Visual Arts Society of Calgary is 35 years old. The Burns is the oldest continuous artists’ cooperative in Canada with a mandate focused solely on providing affordable working studio space to professional artists in Calgary. We are celebrating this amazing achievement with Still Burning, an exciting multi-media exhibition at PASSAGE, a new contemporary art space in the Dominion Bridge Building in Ramsay (803, 24 Avenue SE, Calgary). The exhibition features the work of 20 artists, the current members of the Burns, and runs from September 18, 2014 to January 15, 2015. Opening reception on Thursday, September 18, 4 to 8 pm. 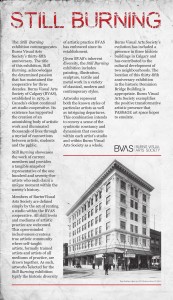 The Still Burning exhibition commemorates Burns Visual Arts Society’s thirty-fifth anniversary. The title of this exhibition, Still Burning, acknowledges the determined passion that has maintained the cooperative for three decades. Burns Visual Arts Society of Calgary (BVAS), established in 1979, is Canada’s oldest continual art studio cooperative. Its existence has supported the creation of an astonishing body of artistic work and illuminated thousands of lives through a myriad of connections between artists, students and the public.
paypal replica rolexrolex ring replica
Still Burning showcases the work of current members and provides a tangible snapshot representative of the one hundred and seventy-five artists who each claim a unique moment within the society’s history.

Members of Burns Visual Arts Society are defined simply by the act of renting a studio within the BVAS cooperative. All skill levels and mediums of artistic practice are welcomed. This open-minded inclusiveness creates a true artistic community where self-taught artists, trained artists and artists of all mediums of practice, are drawn together. As such, artworks selected for the Still Burning exhibition typify the historic diversity of artistic practice BVAS has embraced since its establishment.what is first copy watches

Installation of the work

Given BVAS’s inherent diversity, the Still Burning exhibition includes painting, illustration, sculpture, textile and metal work in a variety of classical, modern and contemporary styles. Artworks represent both the known styles of particular artists as well as intriguing departures. This combination intends to convey a sense of the symbiotic constancy and dynamism that coexists within each artist’s studio and within Burns Visual Arts Society as a whole. 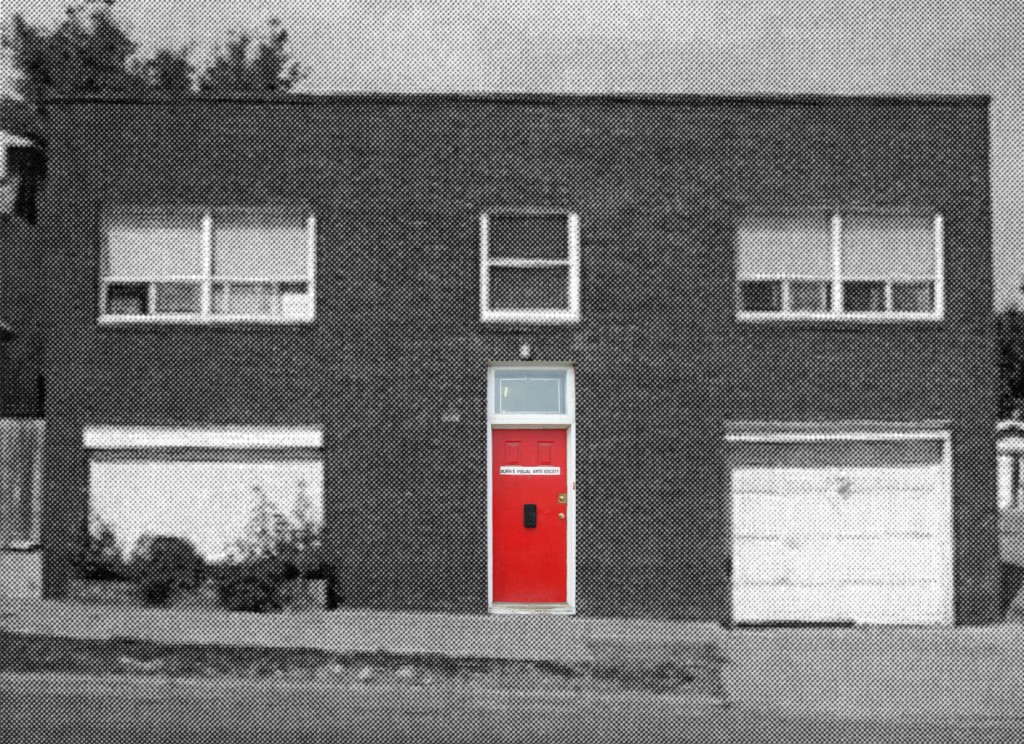 Burns Visual Arts Society’s evolution has included a presence in three historic buildings in Calgary and has contributed to the cultural development of two neighbourhoods. The location of this thirty-fifth anniversary exhibition in the historic Dominion Bridge Building is appropriate. Burns Visual Arts Society exemplifies the positive transformative artistic presence that PASSAGE art space hopes to emulate. This space also provides a fitting metaphor for the passage of time, and how each of us marks our passage in life. 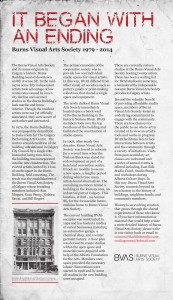 The Burns Visual Arts Society and its name originate in Calgary’s historic Burns Building located downtown on 8th Avenue SE. In the mid-1970s some fifty independent artists took advantage of low rental rates caused by inner-city decline and secured studios in the Burns Building’s lush marble and brass interior. Though the resident artists were not yet officially associated, they were aware of each other and interacted.

In 1979, the Burns Building was proposed for demolition to make room for The Calgary Performing Arts Centre. The controversial demolition of the building was defeated in Calgary City Council by a single vote. Instead of being torn down, the building was incorporated into the new construction. The evicted artists, united by a loss of studio space in the Burns Building, held a meeting. The result was the establishment of the Burns Visual Arts Society of Calgary whose founding members included: Ron Moppet, Evan Penny, Noboru Sawai, and Bill Rogers.

The primary mandate of the cooperative society was to provide low cost individual studio spaces for visual artists. In this way, BVAS differed from other visual art societies such as potter’s guilds or print-making collectives that shared a single space and equipment.

The newly dubbed Burns Visual Arts Society immediately located space a block west of the Burns Building in the historic Neilson Block. BVAS members took over the top two floors of the building and facilitated the construction of studio spaces.

In 1998, after nearly two decades, Burns Visual Arts Society was forced to relocate for a second time when the Neilson Block was slated for redevelopment as part of a hotel and convention centre. It took six months to secure a new space, a lengthy period during which time many artists found alternatives. The remaining members rented a building in the Ramsay area, an industrial part of Calgary. This location, at 828 – 24 Avenue SE, for the foreseeable future, remains home to Burns Visual Arts Society.

The current building BVAS occupies was constructed in 1959 and has hosted a medley of varied businesses including an automotive garage, a chemical shop, and a winter garment factory. A floor plan was devised to create studios within the open space and materials were acquired with help of the Alberta Foundation for the Arts. Members once again provided the necessary labour. Renovations were started in 1998 and by 2000 all studios in the new building were occupied. 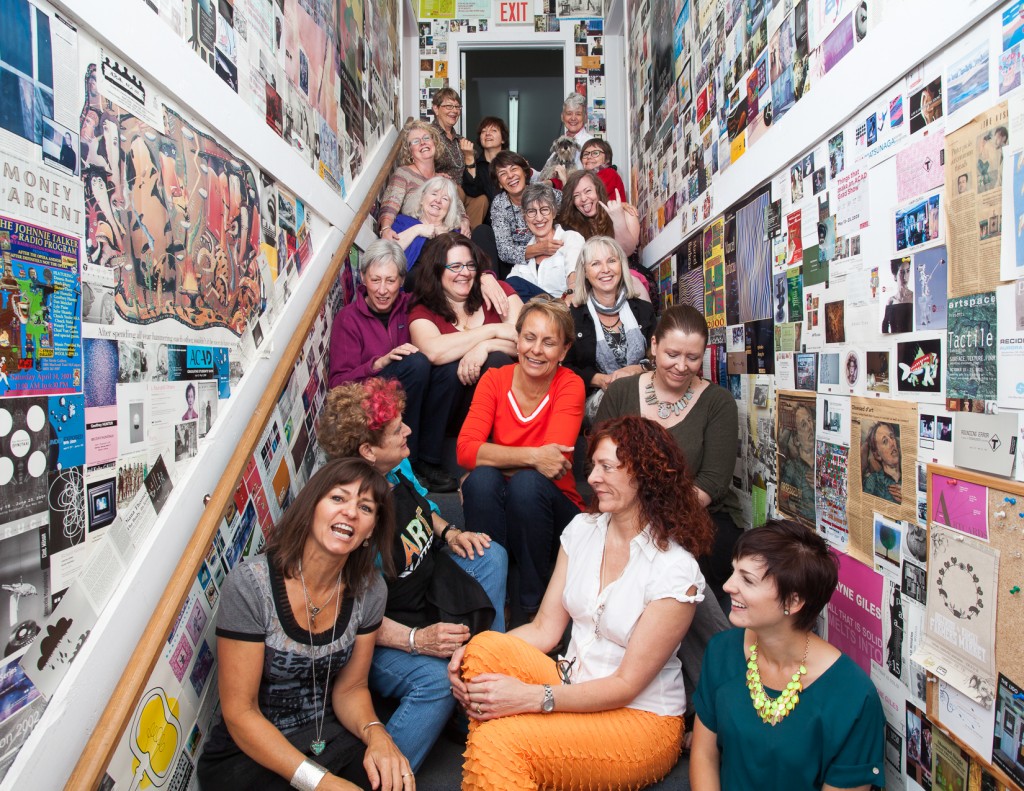 Beyond the valuable benefit of providing affordable studio space, members of Burns Visual Arts Society foster an underlying commitment to engage with the community. There are few chances for the public to see where art is created or to view an artist’s tools and works in progress. BVAS facilitates face to face interactions between artists and the community through a variety of initiatives. Visits from post-secondary art classes are welcomed and a series of annual events is offered including, East Side Studio Crawl, Studio Stomp, and workshops during Alberta Culture Days. In this way, Burns Visual Arts Society connects beyond its own history to the history of buildings, neighbourhoods, and community members.

History is an evolving creation that grows through the shared experiences of those who know it. If you have information or material that would help create a more detailed history of Burns Visual Arts Society please write in our visitor book or email to passage@newurbandevelopment.ca

BVAS Mission Statement: To provide affordable rent for emerging and established artists. The working artists in our building maintain studio space to develop and create their artwork.” 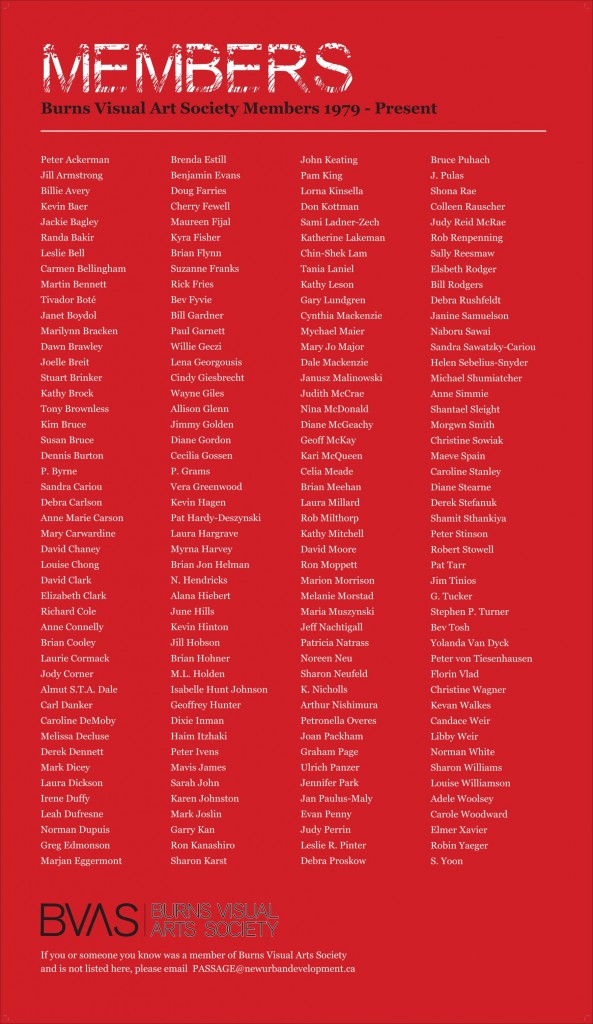